Initiative Lands Him the Job 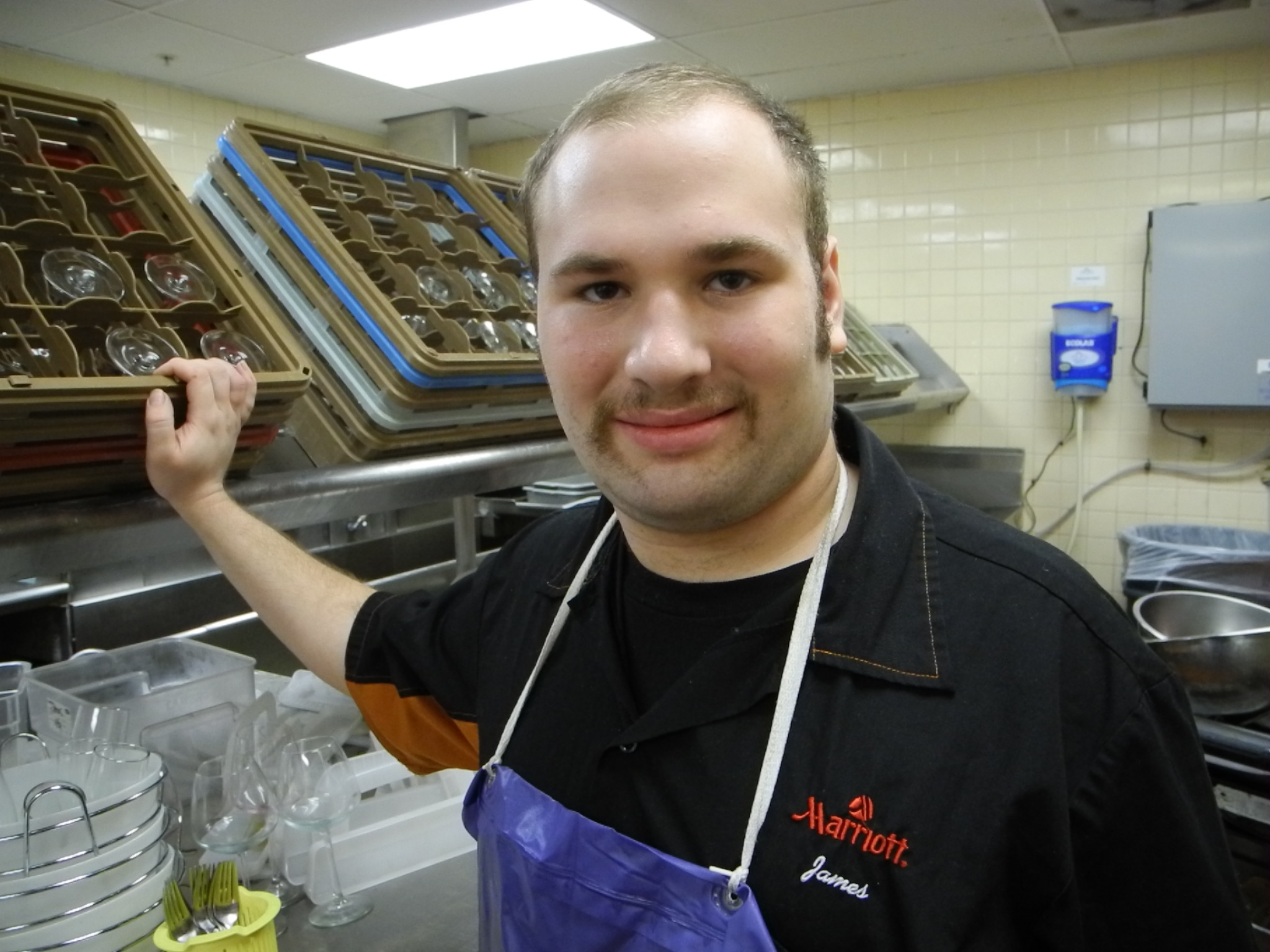 Taking initiative is one hallmark of a good employee, and taking initiative helped James, a LEAP consumer who has a developmental disability, get hired by Marriott Corporation.

James was in the midst of a job training experience at St. Augustine Manor, a nursing facility with which LEAP collaborates extensively, when Anton began his own training. James sensed Anton’s anxiety, and he immediately became a mentor for Anton, demonstrating how to load the noisy dishwashing machine and do other job-related tasks.

“I showed him the ropes,” James said. “It made me feel good,” he added matter-of-factly.

As the end of the training period approached, Bill Marras, LEAP’s employment specialist supervisor, was making sure James was prepared for the job search process. Among other exercises, he and James practiced mock interviews, and when a dishwashing position opened at the Cleveland Marriott Downtown at Key Center, James was ready.

The sous chef who interviewed James was impressed with his answers about speed and team work, but what may have clinched the deal was his answer to the question of how he’d show initiative. He told the chef about Anton, Marras said, and was offered the job.

James now works in the kitchens at the downtown Marriott. In addition to washing dishes, he sweeps, organizes pots and pans and cooking implements, and works the plate line. He is still taking initiative and following his instinct to be helpful.

“I don’t wait for the pans to pile up. If I see two pans, I take them to wash,” he said. “When it’s slow, I ask people if they need something. I ask the bartender if he needs a case of wine glasses. If a cook needs something, I do that because they need it fast,” he said. “I like helping people. It helps me do a better job.”

In his own way, James is expressing the satisfaction that comes from knowing he’s part of an effective work team.

Though his experience has been positive, it hasn’t been completely trouble-free. James has had some difficulty with timeliness, pace, and prioritizing tasks, but LEAP coaches have helped him find solutions. James says his training at St. Augustine was also essential.

“Working at St. Augustine’s gave me more experience and helped me get ready for the pace at Marriott,” he said.

James is proud to work at Marriott. He learned about the corporation’s history at his employee orientation and is eager to tell anyone interested about how founder J.W. Marriott started the business with an A&W root beer franchise in Washington, D.C., that he named Hot Shoppe. James should be proud. In 2013 Marriott ranked 16th (up from 21st in 2012) on DiversityInc magazine’s Top 50 Companies for Diversity. This ranking is due in part to the firm’s commitment to hiring people with disabilities and veterans with disabilities.

But James is proud for a different reason. He has a uniform with his name on it that makes him feel like he belongs.

“When I got my uniform, I’m really one of them,” he said.

Contact us for more information about our Employment Services.

According to Accenture's 2018 research, companies with best practices for employing persons with disabilities outperform their peers.

LEAP provides HR consulting services so your company can recruit, onboard and retain high quality employees to fit a wide range of positions.