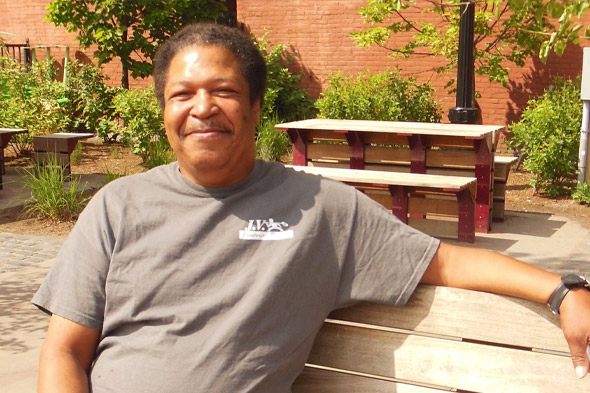 A former Marine and construction worker, Anthony finds it difficult to be idle. “I don’t know how not to work,” he said. A horrific car accident in 2008 left him with a traumatic brain injury (TBI) and consequent balance problems. Returning to construction was impossible, and without work, Anthony felt lost. Lately things are looking up, though. With LEAP’s help, Anthony has found employment at a respected janitorial services company. But now he has another problem. “All the supervisors want me to work for them because I just go to work, I know what to do, and I just do it. So I just sit around and watch them fight over me,” he laughs. What a dilemma!

Anthony’s sense of humor is evidence of his courage and resilience, but he doesn’t see himself as either courageous or resilient. “I’m just me,” he says. “I’m just going to work.” At JV Janitorial, based in Brooklyn Heights, he is part of a special projects team that does large, one-time jobs cleaning construction sites for hospitals, medical offices, libraries, and supermarkets.

Anthony’s construction career began at age 11. He started by cleaning up work sites for his father. “Then I started watching the plumbers and the electricians work, and the different guys would say, ‘Hey, do you want to learn this?’” In this way, Anthony learned all aspects of construction.

Anthony worked with another agency from 2008 to 2011, when the Rehabilitation Services Commission transferred his case to LEAP. Tonya Goodrum, his employment specialist at LEAP, thought this history meant Anthony would be hard to place. Instead, she learned that Anthony would help make his own success through his work ethic and positive attitude.

“Anthony did his part in finding interviews, he shows up on time and works hard,” Goodrum said. “He does everything you ask and more. He is there for himself and for his employers, who have nothing but good things to say about him.”

Anthony took advantage of a range of LEAP’s services. He began his journey to employment with an eight-week community-based assessment doing janitorial work at a shelter for homeless men. This allowed Goodrum to evaluate his employment skills, which were excellent. Then she helped him polish his resume and develop strong answers to likely interview questions. She also set him up for training to upgrade his computer skills. And, of course, she offered lots of support and encouragement.

ldquo;LEAP helped me with my patience,” Anthony said. “Everyone made me feel like I could do this.” For example, he said, his TBI sometimes makes him stutter, which makes him anxious. “Tonya said to me, ‘Why are you trying to rush? Take your time.’ That’s exactly the advice my doctor gave me.” Her encouragement allowed him to slow down and relax when answering questions, he said.

When he left the Marines, Anthony earned a degree in culinary arts from Ohio University, and in his leisure time, he shows his love for family members by cooking for them. His son works long hours, and occasionally Anthony brings him a home-cooked dinner at work, just to make sure he’s eating well.

Anthony still sees a number of doctors and therapists as his recovery continues, but his outlook has changed dramatically since he first became involved with LEAP.

“When I wasn’t working, after the accident, it was mentally getting to me. So getting back to work was a joy. After my accident, I didn’t think I’d ever work again. I’ve only been with LEAP for two years and already I’m working!” Anthony said.

“LEAP helped me so that I can do for myself what I thought I’d never do again,” he continued. “LEAP gave me my hope back, gave me my life back.” Then he was off to a doctor appointment before reporting to work for a 5 p.m. assignment.