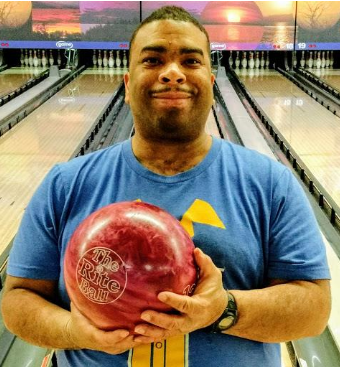 Preston Carter is a well-known presence around Quantum LEAP. Entering his 9th year with our program, he may be what some call “a lifer.”

Sherri Morris, Preston’s mother, wanted Preston involved in after-work activities. During an annual meeting with Preston’s employer, VGS, Sherri expressed this need and desire. It was then, back in 2008, that Preston and Sherri were informed of a social and recreational program called Quantum LEAP.

Sherri thought this was a great opportunity to get Preston out of the house and involved in activities that he may enjoy. Preston was not so thrilled. He had been more introverted; he didn’t want to be bothered. Preston was not interested in leaving the house; he preferred to come home after work, eat dinner and then hang out in his room for the rest of the night.

Preston began participating with Quantum LEAP in the early part of 2009 as a shy, introverted man nearing forty. In his first year, he participated in many activities including Walking Club, Bowling League, and dances. He remained that shy, introverted man for some time, still preferring to be left alone. Yet, at the same time, something was happening: Sherri started to notice changes, however small, in Preston. Over time, he started to come out of his shell.

Fast forward to today, and you will see Preston is no longer the same man. Preston’s true personality has shone through; something Sherri attributes a lot to Quantum LEAP. He is now very vocal about engaging in different activities. Preston participates in most of the weekly activities Quantum LEAP offers and some weekend activities, too. Sherri wanted to see a play Quantum LEAP was offering tickets to and brought Preston with her. Little did she know it would catch Preston’s interest. He has developed into quite the theatergoer.

With all of these activities Preston participates in, he has to keep his mother on top of things. He wears a watch and reminds Sherri when it is time to leave for an activity, especially bowling. Preston has grown into a skilled bowler; it is one of his favorite activities. He competes with his friends and has a blast doing it.