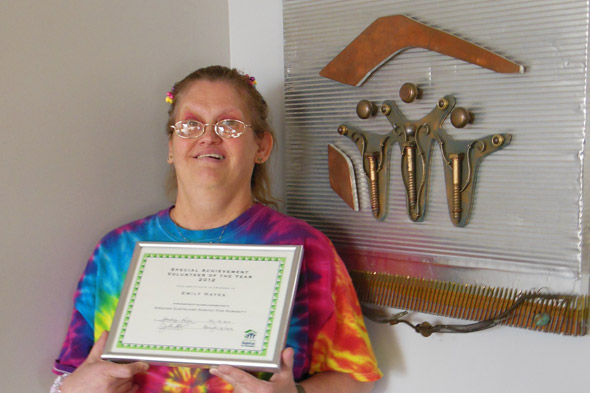 Emily Hayes has been a housekeeper at the administrative office of Greater Cleveland Habitat for Humanity for the past five years. It’s not easy work, as construction volunteers and others frequently tromp through the office to the warehouse with their mud-encrusted work boots. Nonetheless, her coworkers describe her as polite, professional, industrious, and friendly. Her positive attitude is so unfailing that Habitat awarded her the 2012 Special Achievement Award at its annual award presentation Nov. 14.

Hayes is proof that having a disability doesn’t prevent someone from being productive and responsible. She has a developmental disability and is a client at the Cuyahoga County Board of Developmental Disabilities. She works at Habitat through CCBDD’s partnership with Linking Employment, Abilities and Potential, an agency that serves people with all types of disabilities.

Hayes works four hours a day, five days a week, at Habitat, where she ensures the cleanliness of restrooms and lunch area, cares for office plants, and takes care of recycling. She takes pride in making coffee for the office, and if she happens to be absent, everyone knows because the coffee pot is empty.“Habitat is the best place I’ve worked,” says Hayes, who previously worked in a hotel and in a store. “People are kind to me here. I like it here, and I have more friends here.” Her favorite task, she says, is cleaning the restrooms. When told that very few people would choose that task as a favorite, she matter-of-factly states, “Well, I like it.”

Although it’s hard to get Hayes to say more than a few words in answer to a question, she is eager to show off photos of her two grandsons. And her award, of course. “When I got my award, everyone called me the queen,” she says proudly. She also received a volunteer award in 2009.

Beverly Kliber, LEAP’s site supervisor and job coach at Habitat, works every day with Hayes and the three other LEAP/CCBDD consumers at the Habitat site.

“The motto I teach all my consumers is: Focus on your abilities, not your disabilities,” Kliber says. “Emily never says, ‘I can’t do that because I have a disability.’ I give her more responsibility to stretch her potential and abilities. She’s always looking for work to do. She has a strong sense of pride in her work and a great sense of humor.”

Leslye Arian, volunteer coordinator at Habitat, also praises Hayes’ can-do attitude. “Emily is always willing to help out, and she even identifies areas that need to be addressed. She often has very good ideas,” she says.