This decade marked the height of the eugenics movement, as well as the birth of rehabilitation programs in America.

Medical experts applied the new (and largely misunderstood) science of genetics to show that people with disabilities were more fertile, convincing many states to pass restrictive marriage and sterilization laws to stop people with disabilities from starting families. The rise of questionable intelligence tests often condemned people to a segregated life in an institution and tied disability to arguments of racial and gender inferiority.

Prominent members of society supported the eugenics movement. Alexander Graham Bell sought the sterilization of the deaf and the Carnegie Foundation funded the Eugenics Record Office, which kept genealogical records and promoted the use of sterilization to eradicate disability in society (their research was used by the Nazis to create a scientific basis/justification for the holocaust, the first victims of which were people with disabilities).

World War I called into questions the practice of separating people with disabilities from social and economic participation. Men with cognitive disabilities served their country by contributing manual labor necessary to the war effort. Also, the large number of disabled veterans retuning from Europe prompted legislators to implement and fund vocational rehabilitation programs. The devastation and brutality of the war also caused Americans to lose their faith and enthusiasm in social reform through eugenics.

Excerpt from The Handicapped-By One of Them, by Randolph Bourne: 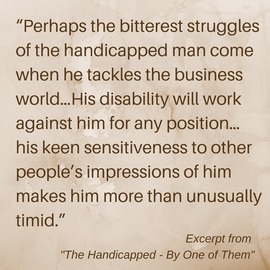